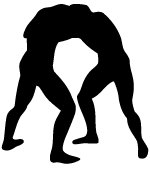 NFL Players who wrestled. Wrestling is a great compliment to many sports!

wrestling: the perfect complement to football

NFL Logo
"I would have all of my Offensive Lineman wrestle if I could."
- John Madden, Hall of Fame Football Coach "I'm a huge wrestling fan. Wrestlers have so many great qualities that athletes need to have." - Bob Stoops - Oklahoma Sooners Head Football Coach"Well-respected by coaches and teammates for his tough, aggressive nature (comes from his prep wrestling background)"
- NFL Draft Scout on Alex Stepanovich

"One of the messages Denney hopes to relay to the Valley high school coaches and athletes is that wrestling is the perfect complement to football. While football is in its offseason, wrestling provides the perfect opportunity for the athletes to remain active, while working on their agility and conditioning, Denney said.

Shawhan can attest to Denney's theory, also having an extensive gridiron background. Along with playing semi-pro football, Shawhan also has years of being an assistant football coach throughout the Rio Grande Valley (Mission High, Harlingen High, PSJA High, McAllen Memorial and McHi).

"In Texas, everyone knows that high school football is king," Denney said. "I'm telling you, though, Texas is catching up in wrestling. And a lot of the football coaches are realizing how much wrestling can help their football team. And believe me, that's the truth. I know it firsthand. You have to remember when I started out I was a football coach in high school, and I would go to the wrestling team and get everyone that could to sign up for my football team."

"My football coach told me, 'You better get in wrestling or I'll beat you up,'"
-- Tim Lee, Texas High School All-American

Lee said that wrestling helps him on the football field because he knows he has to stay low.

"In wrestling, you've got to have self-discipline and self-motivation. As a lineman, it's the same thing ... me vs. you. He brings that mentality to the football field."
- Lee's High School Football Coach, Tim Howard

"Some of Matt Roth's intensity can also be attributed to his successful run as a state-champion wrestler in high school. Many coaches, scouts and wrestlers-turned-football-players will laud wrestling for the leverage and quick hands it provides for football. Roth credits wrestling for the never-say-die attitude it gave him.

Roth said his dream partner on the wrestling mat would be Ravens LB Ray Lewis, himself an accomplished high school wrestler."


Here are just a few NFL Players that wrestled: